The battles of Hadzhi Dimitar and Stefan Karadzha’s detachment will remain memorable in the history of the struggles for the Liberation of Bulgaria during the summer of 1868.

The detachment, consisting of about 130 revolutionaries, stepped on the Bulgarian coast on 7/19 July 1868, and in less than two weeks walked the distance from the region of Yankovo garlo, in the district of Svishtov, to Buzludzha peak. There were uneven and bloody battles with the Turkish armies at Karaisen,  Karapanovata koriya and Dalgi Dol. During the fourth battle at Kanladere on 10/22 July the voivode Stefan Karadzha was wounded and captured. As there were only a few revolutionaries left, the detachment withdrew towards the Balkan Mountain. 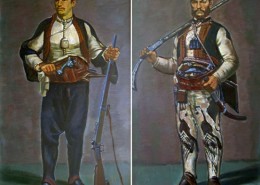 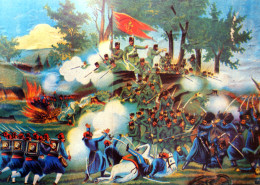 The revolutionaries passed near Uzana region, Malusha peak and along the ridge of Stara Planina and headed to St. Nicholas peak. On 18/30 July, after they had lost 14 of their wounded comrades, 28 people together with the voivode Hadzhi Dimitar met the dawn on Buzludzha peak. Encouraged by the fact that there had not been any battles with the Turkish troops for the last few days the rebels decided to have a rest for a while as they felt extremely exhausted. Only the guards stayed awake.

Early in the morning 500 Turkish bashi-bazouk, led by the famous chief Kurtchu Osman, set off from Kazanlak to Buzludzha. At lunch time they approached the sleeping revolutionaries from the Ashkali meadow. The zaptiehs of the leader Syuleyman from Kazanlak held a position on the western slope of the mountain. From north the fiery ring was closed by 200 regular soldiers from Tarnovo. A total of 700 guns were pointed at thirty rebels.

The silence of the July noon was torn by a loud gun volley. Hadzhi Dimitar encouraged his comrades for the last battle by saying the words, ‘Brothers, let’s die as Bulgarians!’

Step by step, the enemy surrounded the tiny detachment, which turned out to be in an extremely bad situation. The bare peak was an excellent target point.

The uneven battle lasted for two hours and a half. One by one the rebels were stricken down by bullets or died from the Turkish swords. Nobody surrendered. In those minutes full of tension an enemy bullet shot the voivode. The newspaper Le Courrier d’Orient  wrote ‘… Hadzhi Dimitar is severely wounded; he is nearly captured by the Turkish soldiers. But armed with a revolver, he fought until his last minute with energy worthy of better times… ‘

Honorable death of a national hero who dedicated his short life to his Fatherland!

A group of about ten people made a desperate attempt to break out of the encirclement. Instead of waiting for the approaching Turkish bashi-bazouk lines, they rushed towards them shooting. Miraculously four rebels managed to escape.

Gradually, the gunfire faded. The bare peak was covered with the bodies of the killed revolutionaries. Two days after the battle, on 20 July (August 2), some villagers from Kran, Enina and Shipka buried the national heroes with the permission of the Turkish authorities. Until the Liberation the caring hands of people from the surrounding villages maintained the modest graves. 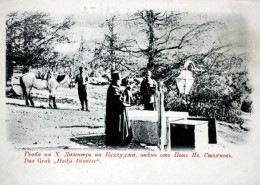 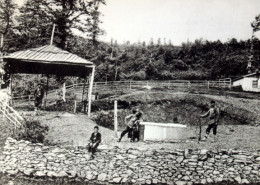